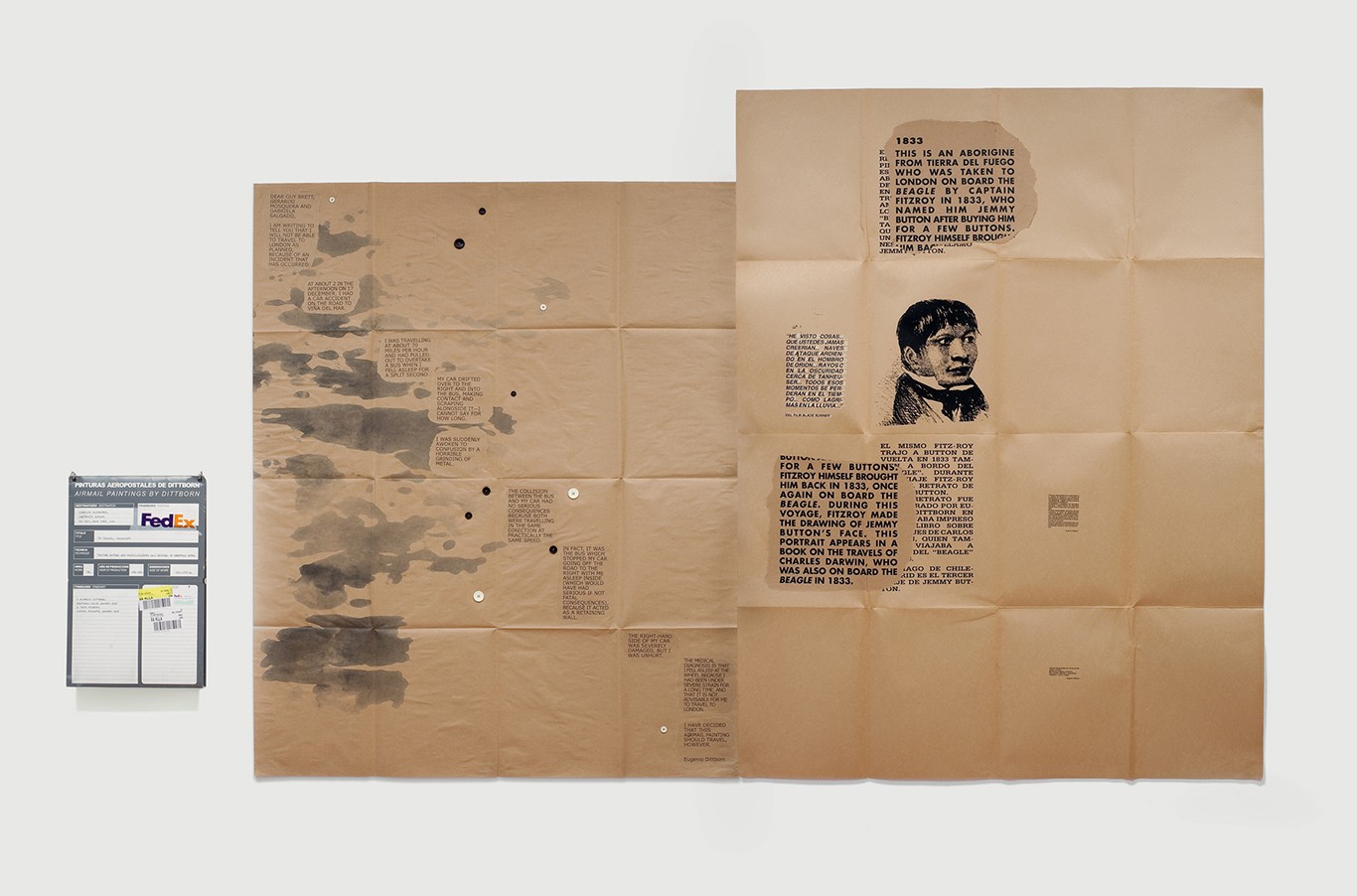 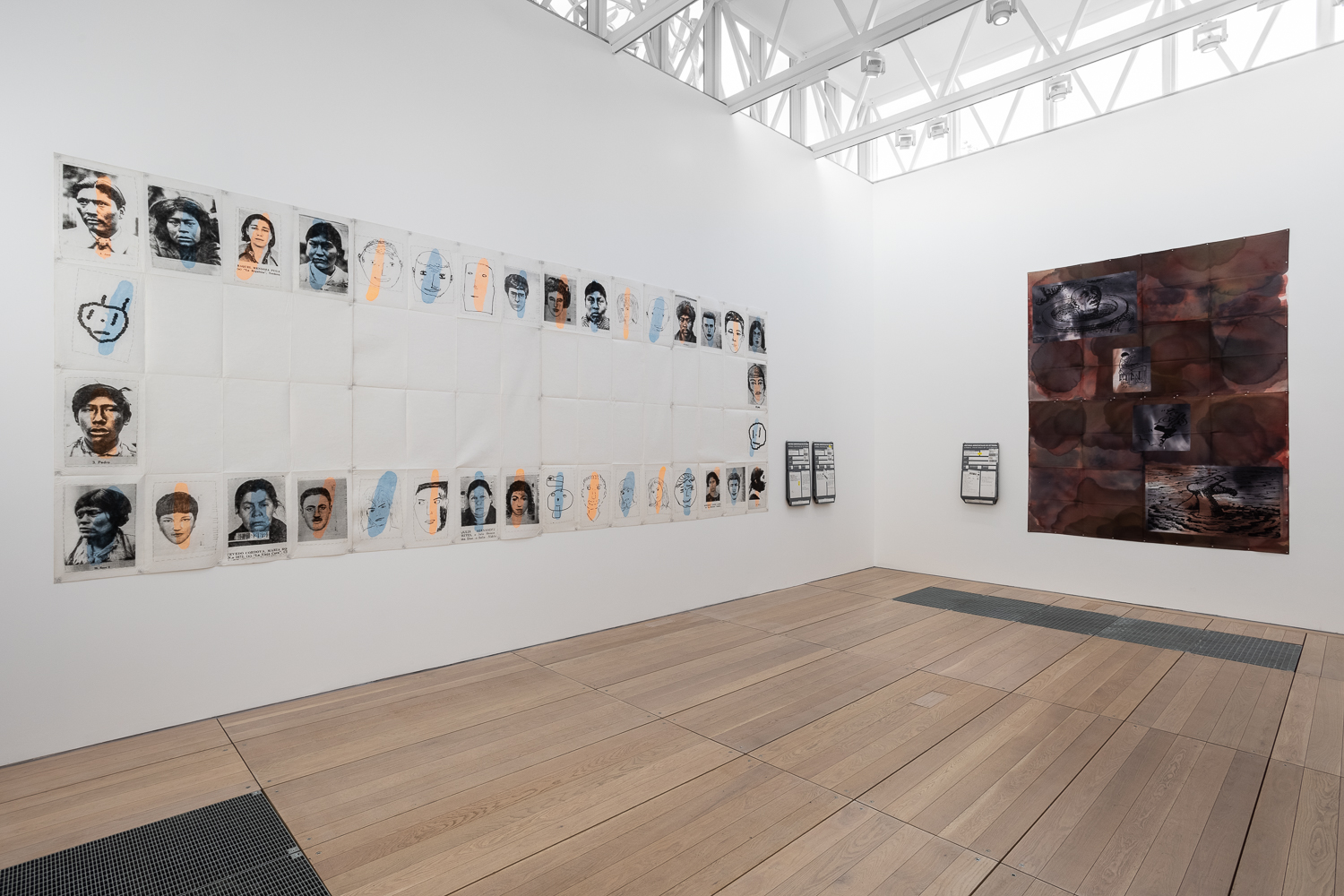 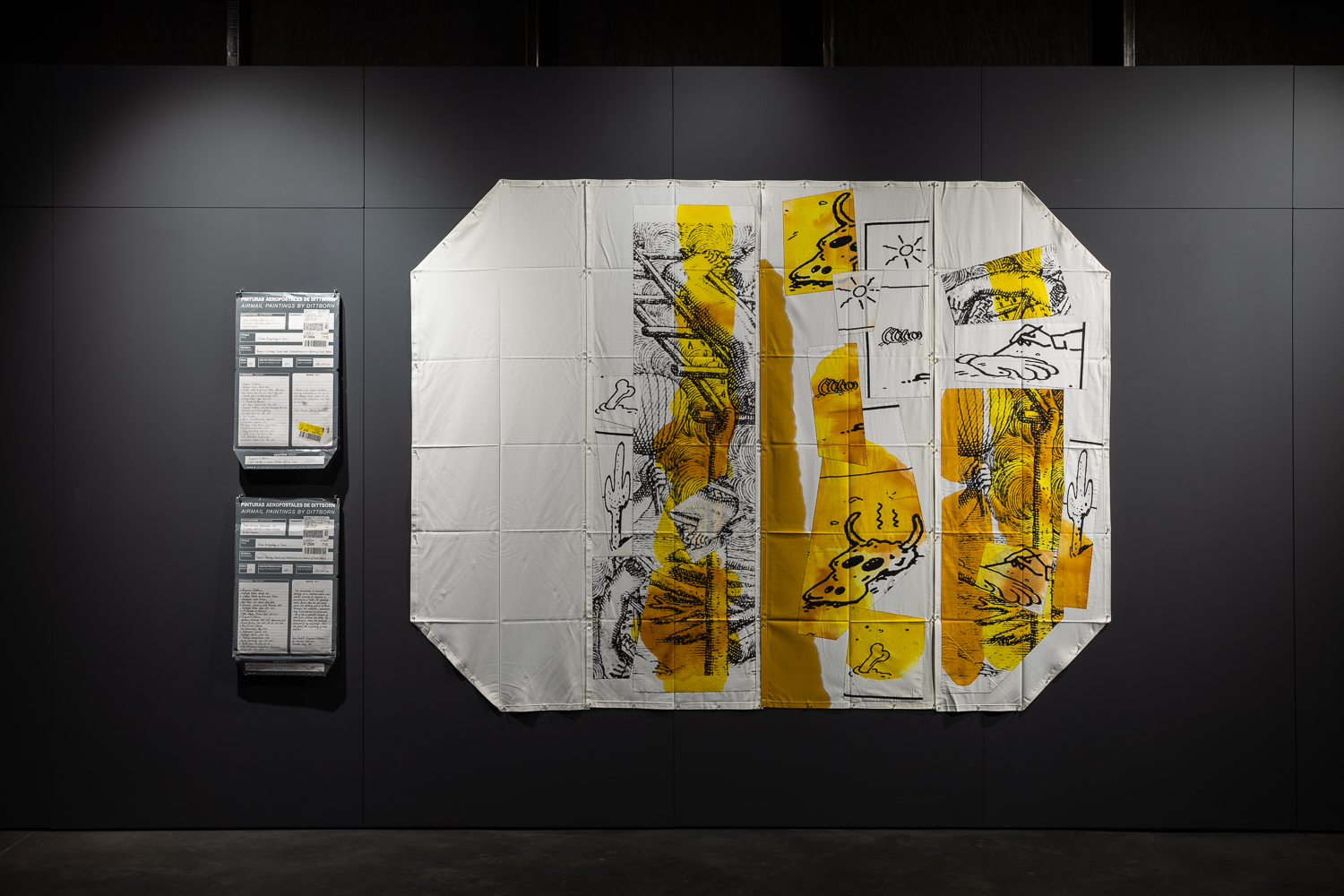 The first exhibition of Eugenio Dittborn’s work in the UK since 1993, included historical and new works, sent to the gallery using couriers, honouring his renowned use of airmail. Since the 1980s, Dittborn’s large-scale works have been folded and dispatched in airmail envelopes to galleries worldwide, surmounting restrictions of movement created by national borders, oppressive governments, and geographical distance.
Crossing impermeable national borders and traversing international networks of mail distribution, his works powerfully transcend the spatial barriers between the Global South and the western world, tracing the lines of colonial histories of subjugation and exploitation, and the cultural hegemony of western art history. Folded in the fragility of an envelope, the process of which provides the works with their distinctive 16-part grid, the moment of their opening and display produces large-scale effect from the slightest of means – a guerrilla claim for space by an artist knowingly outside of the ‘centre’, and not without humour.
Works were selected to span different media employed across Dittborn’s oeuvre, as well as film works that are less often exhibited. Originally using brown Kraft paper, Dittborn later moved to fabric, across which surfaces he reproduces found images, texts and drawings. Gleaned from newspapers, magazines, drawing manuals and books, each is selected, as Dittborn states, because they “amazed, disturbed, frightened, and sometimes tickled me.” Unfolded now across the decades, each acts as a document of different moments in both Dittborn’s personal history, and Chilean history – coming into direct and provocative contact across the pictorial plane.

Included were works from the series Historia del rostro (History of the Human Face) (ongoing), which bear faces drawn by the artists’ daughter in stark juxtaposition with mug shots and portraits of indigenous Chileans. Confronting the viewer with a direct gaze, these photographs are vivid moments in which the power of the state upon a subject is fixed and inscribed, and uncomfortable examples of the ethnographic gaze, through which indigenous populations were ‘possessed’ by their colonizers. Recent political upheavals in Chile have rendered the exhibition an example of the cyclical nature of geopolitical instability in the face of social injustice and inequality.

END_OF_DOCUMENT_TOKEN_TO_BE_REPLACED

In 1997 his work was the subject of a survey exhibition at the New Museum of Contemporary Art in New York, which travelled to the Museo Nacional de Bellas Artes in Santiago (1998). In 2010, his recent work was exhibited in a one-person exhibition at Museo De Artes Visuales (MAVI), Santiago de Chile. In the fall of 2011, a survey of Eugenio Dittborn’s large scale, multi-panel ‘airmail paintings’ was held at the Bienal do Mercosul in Porto Alegre, Brazil.

In 2012, his work was selected for inclusion in “Intense Proximity” La Triennale de Paris and was a part of, “This Will Have Been: Art, Love, & Politics in the 1980s,” which travelled from the Museum of Contemporary Art, Chicago, to the Walker Art Center, Minneapolis, and the Institute of Contemporary Art, Boston. “Airmail Paintings 1989-2011”, an exhibition of eight large works was shown at Alexander and Bonin in the fall of 2012.

In 2013, Museum Het Domein, Sittard presented a retrospective of his airmail paintings followed in 2014 by two solo shows, one “Pinturas Aeropostales” at KOW, Berlin and a second exhibition of recent drawings at D21 Proyectos de Arte, Santiago. The following year, his work was included in the group exhibition “Resistance Performed – Aesthetic Strategies under Repressive Regimes in Latin America” at Migros Museum für Gegenswartskunst, Zürich. In 2015, the artist was the subject of a solo installation “Las Dos” at the Pontificia Universidad Católica, Santiago.

END_OF_DOCUMENT_TOKEN_TO_BE_REPLACED 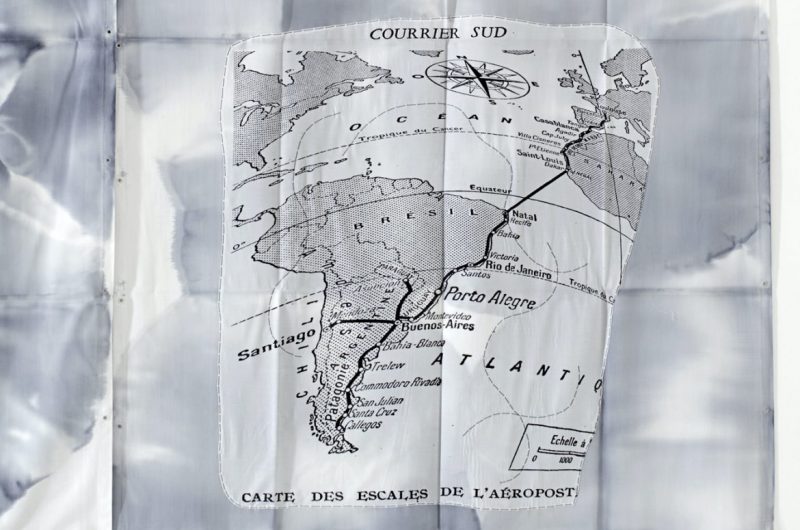 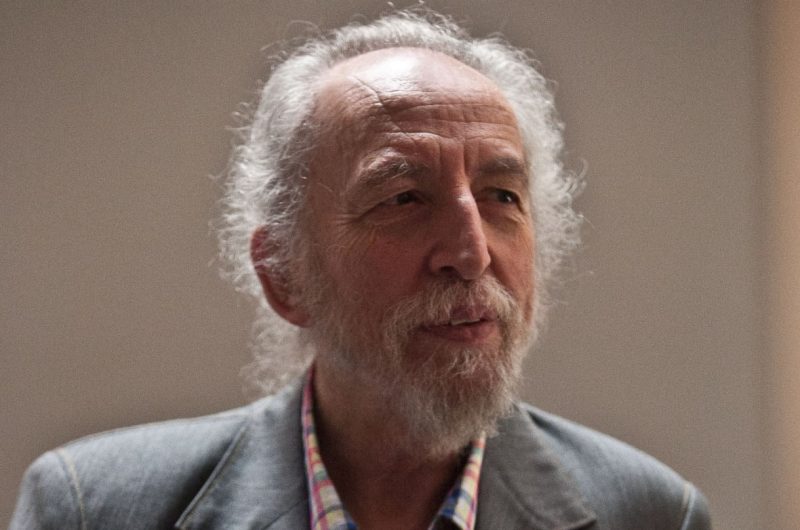