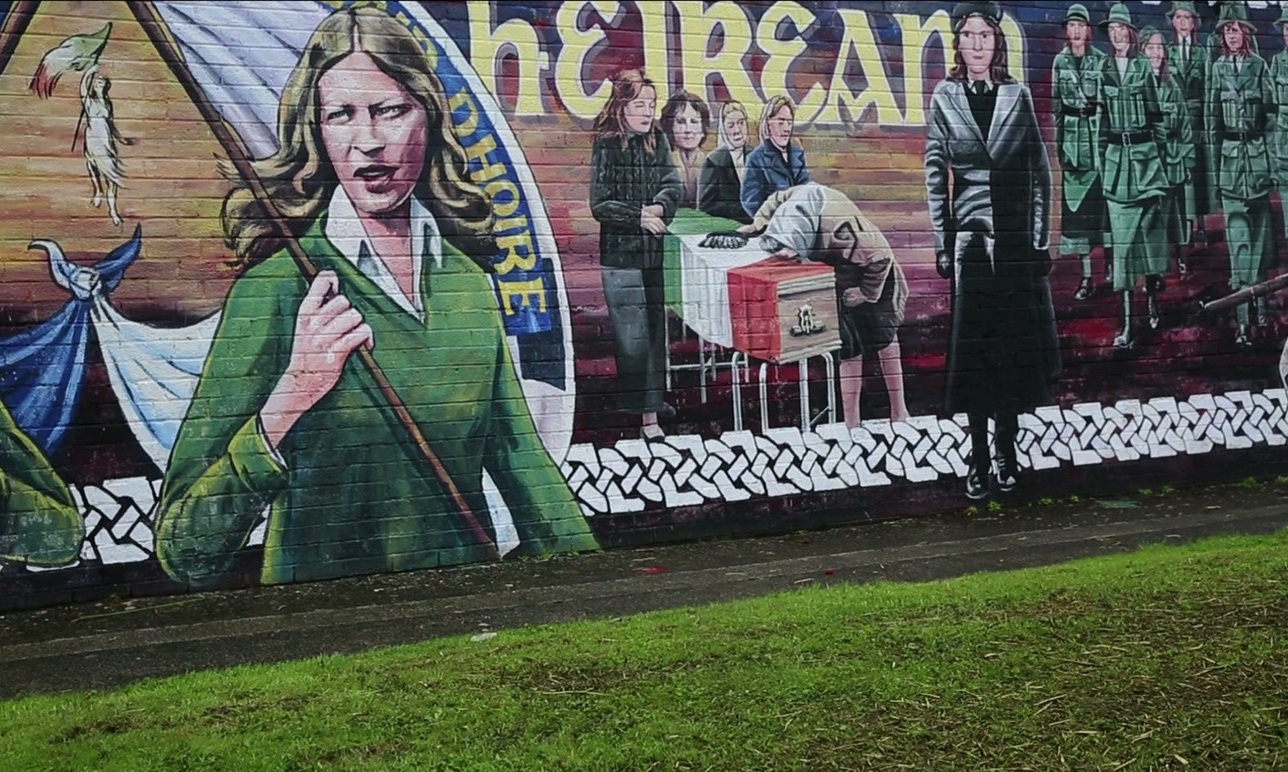 Work by British artists has referenced historical links between the Northern Irish and Black American civil rights movements. This seminar will focus on how contemporary curating can frame such connections, beginning with a screening of Helen Cammock’s film The Long Note (2018), before presentations by and discussions with Clare Carolin, Bill Rolston, Helen Cammock and Cherry Smyth.

They will explore questions such as: how have visual images generated in distinct contexts of colonialism and racism transmitted information and affect between communities battling for social justice? How might curatorial practice address the protest aesthetics of anti-imperialism in the North of Ireland?

This event is free and open to all, with no booking required. Seats will be allocated on a first-come-first-served basis.

END_OF_DOCUMENT_TOKEN_TO_BE_REPLACED

Helen Cammock explores social histories through film, photography, print, text, song and performance. She is motivated by her commitment to questioning mainstream historical narratives around blackness, womanhood, wealth, power, poverty and vulnerability. Mining her own biography in addition to the histories of oppression and resistance, multiple and layered narratives, reveals the cyclical nature of histories. Cammock was the joint recipient of The Turner Prize 2019 and the 7th Max Mara Art Prize for Women. Recent exhibitions include Behind the eye is the promise of rain, Kestner Gesellschaft, Hannover, Germany (2022); Concrete Feathers and Porcelain Tacks, Touchstones Gallery, Rochdale UK (2021) and The Photographers Gallery, London, UK (2021); Beneath the Surface of Skin, STUK Art Centre, Leuven, Belgium (2021); They Call it Idlewild, Wysing Arts Centre, Cambridge, UK (2020); Che Si Può Fare (What Can be Done), Collezione Maramotti, Reggio Emilia, Italy (2020) and Whitechapel Gallery, London, UK (2019); The Long Note, VOID, Derry, Northern Ireland and The Irish Museum of Modern Art, Dublin, Ireland (2019).

Clare Carolin is an art historian, curator and Senior Lecturer in Art and Public Engagement at Kings College London. Her work focuses on the intersection of contemporary art and various forms of state violence including socially detrimental urban overdevelopment and militarized force during the long 20th century. She researches how art, artists, architects, and urban planners become implicated in the exercise of hard and soft state power, ‘inadmissible heritage’ in UK public collections, and artist monitoring by the state. Conversely, she explores visual histories of interracial solidarity and develops revisionist curatorial formats to reinterpret the art of the past. Her forthcoming book The Deployment of Art (Routledge, 2023) combines contemporary art history and theory with security, intelligence, and media studies to investigate officially commissioned art during the Northern Ireland troubles of the 1970s and the 1982 Falklands/Malvinas conflict.

Bill Rolston is a former professor of Sociology and former director of the Transitional Justice Institute at Ulster University. During his career, he researched and wrote on a range of subjects – from media coverage of the Northern Ireland troubles to reproductive rights, and from unemployment to political ex-prisoners. Another continuous research interest over 40 years has been his focus on political murals. He has a large archive of photographs of political murals throughout this period and has reproduced hundreds of them in a series of books, Drawing Support, each volume of which covers a different period. He has also written about political murals in Chile, Colombia, the Basque Country, Sardinia and Gaza.

Cherry Smyth is an Irish critic, curator, poet and novelist, based in London.  She is Associate Professor in Creative & Critical Writing at the University of Greenwich. She co-curated Limber: spatial painting practices with Jost Münster at the Herbert Read Gallery, 2013.  Her catalogue essays include Sophy Rickett, Elizabeth Magill, Orla Barry, Zineb Sedira, Brigid McLeer, Salla Tykka, Flora Parrott, Louisa Fairclough and Dirk Braeckman, among others.  She has published four poetry collections and one novel.  Her latest poetry collection, Famished, Pindrop Press, 2019, explores the politics of hunger starting with the potato famine and considers the role of British imperialism in causing the largest migrant crisis of the 19th century. She was recently made a Fellow of the Royal Society of Literature. She writes regularly for Art Monthly.  www.cherrysmyth.com. Twitter @CherrySmyth Instagram @cherrysmythpoet.